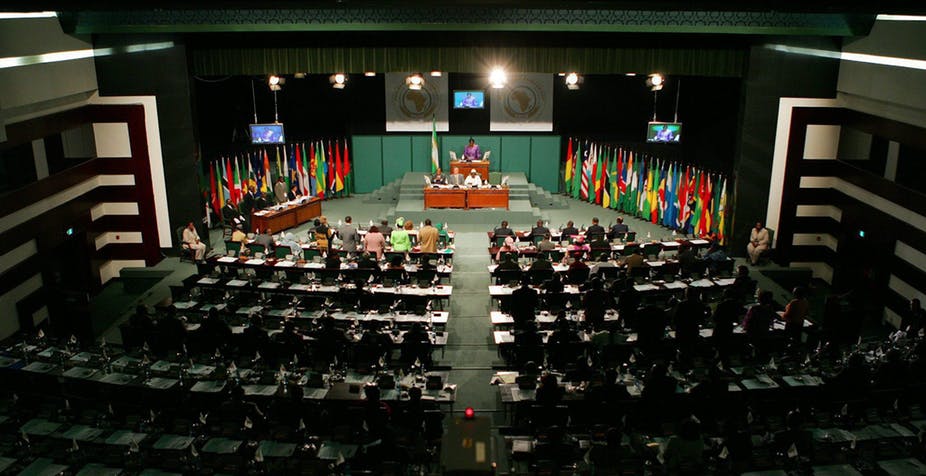 The Pan-African Parliament (PAP) has recently been in the news for the wrong reasons. There have been allegations of abuse of power by its Cameroonian president, Nkodo Dang. He’s been accused of refusing to table a report about the organisation and its finances. His lavish lifestyle at the expense of the South African government has further tarnished the institution’s image.

The PAP was established in 2004 by the African Union. The protocol that established it gave it an advisory role only. It envisaged that a conference would be organised to “review the operation and effectiveness” five years after it was set up. That conference should have happened in 2009, but never has.

The PAP is made up of 250 members representing 50 African Union (AU) member states. Each member state has five members. It is headed by a president, who is supported by four vice presidents. The president and vice presidents represent Africa’s five sub-regional zones. The parliament is funded by the AU and other external donors including the European Union (EU), the World Bank, International Monetary Fund (IMF), and the United Nations Development Programme.

The PAP is different to the EU parliament in two crucial respects: members aren’t directly elected and it has no binding legislative powers.

The PAP’s lack of meaningful legislative powers and lack of accountability are already major concerns. Negative messages about profligacy could further diminish its legitimacy and if not addressed, could threaten the parliament’s very existence: funders could walk away.

The parliament’s legitimacy rests on two points. One is its ability to exercise full legislative powers. African leaders have not shown any intention to empower the institution. The 2014 PAP Protocol gave the parliament only powers to submit “draft model laws to the Assembly … for its consideration and approval”. This position makes it nothing more than an expensive talk-shop, where no binding rules or regulations can be enacted.

The point relates to accountability. Two factors affect this – firstly, the issue of the direct election of PAP members. Its representatives are national legislators chosen by their respective countries. This means that members don’t necessarily owe any allegiance to citizens. They’re answerable only to national parliaments or governments.

The other factor affecting accountability is that, since representatives can’t make binding laws and aren’t directly elected by citizens, they are not obligated to render an explanation of their stewardship to civil society.

It is this point that appears to have emboldened Dang to behave as though he’s above scrutiny. If he was directly elected, he might have a keener sense of obligation to his constituency, with the understanding that any misdemeanour would lead to him being punished at the polls.

This is not to say that directly elected representatives can’t be corrupt, but to suggest that the involvement of civil society in electing PAP representatives would improve awareness and oversight activities.

Allegations of corruption and wasteful expenditure at the PAP have a number of damaging consequences. One is the possibility of donors reassessing their contributions.

Apart from foreign donors, the PAP also gets support from the African Development Bank. South Africa provides funding for its operations.

While the South African government is yet to comment on the allegations, major newspapers in the country have been extremely critical. It’s not inconceivable that Pretoria might be forced to re-assess its financial contribution in the face of civil society pressure.

The other danger is that bad publicity could dent the PAP’s efforts to secure more meaningful legislative powers. This is seen as important in the broader context of the drive to great integration on the continent. In addition, being able to make laws will improve the parliament’s relevance and give citizens a stake in the regional integration process.

The image of the parliament as corrupt is also bound to raise even more questions about its continued existence. The PAP is costly to run. Some may question if it’s worth keeping or whether it might be more productive to channel the funds that keep it afloat to other strategic regional integration projects. These include infrastructure development and the promotion of good governance.

A clean PAP is imperative

The controversy about the PAP’s leadership doesn’t augur well for Africa’s integration drive. It has caused division within the institution, a factor that could slow down the quest for autonomy to make binding laws.

The AU has to step in. The AU Assembly should urgently insist that the PAP releases its financial report and investigates the accusations against Dang.

The South African representatives to the parliament have already expressed concerns over Dang’s leadership, accusing him of corruption. If he’s found guilty, the organisation shouldn’t hesitate to act appropriately against him. By doing this, the AU will be sending a clear signal that it disapproves of any irregularities. It will also highlight the importance of having a clean organisation at the core of the regional integration process.

The principle of accountability cannot be separated from the exercise of full legislative powers. The AU cannot afford to allow the parliament’s leadership to stand in the way of deepening Africa’s regional integration process.

This article was originally published on The Conversation. Read the original article.