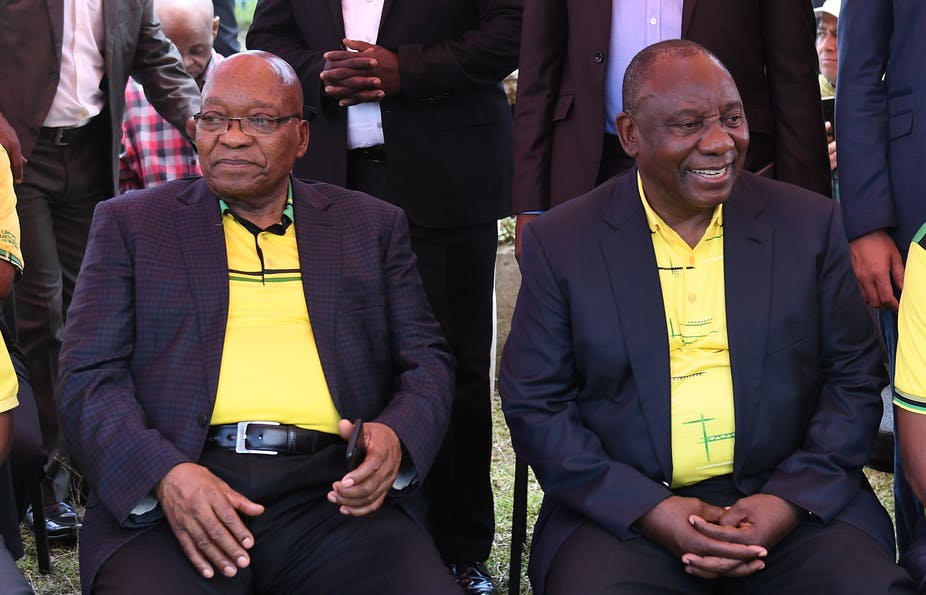 By: Steven Friedman, University of Johannesburg

South Africans are about to vote in the most competitive election they’ve had since democracy began in 1994. But, despite this, the poll will have far more impact on the factional battle within the governing African National Congress (ANC) than on the contest between it and other parties for control of government.

The election follows a decline in the ANC vote from just under 70% in 2004 to around 54% in 2016’s local elections. This seemed to signal that the ANC was no longer guaranteed re-election nationally and in most provinces. There has been much talk of the ANC vote sinking below 50%, forcing it to seek coalition partners if it wants to govern.

In Gauteng, the country’s economic heartland, the ANC won only 46% in the 2016 municipal elections and was forced into opposition in two metropolitan areas – Tshwane and Johannesburg. This happened because the Economic Freedom Fighters (EFF), a breakaway from the ANC which espouses a more militant brand of African nationalism, agreed to support the country’s second biggest party, the Democratic Alliance (DA), even though they differ on just about everything. This raised the possibility that a similar arrangement this time will mean the ANC will no longer govern in Gauteng or nationally.

So, is South Africa about to see its first election in which national power changes hands? No. The ANC is almost certain to remain in government in all the eight provinces it controls, including Gauteng. This will leave the Western Cape, which the DA holds and is likely to retain despite claims that it is in trouble, as the only province in which the ANC is not in government.

This prediction is not based on opinion polls which, in this election, have continued their tradition of doing more to confuse than inform. One poll has the ANC at 61%. Another says it is on the cusp of losing its majority . The DA’s projected vote veers just as wildly. The only constant is claims that the EFF will improve although this is not what is happening in municipal by-elections, where its support remains largely unchanged.

So, the polls tell us little and there is a good argument for ignoring them. But they do have one use. They largely agree on what won’t happen: the ANC won’t lose power.

Why the ANC is sitting pretty

Predicting that the ANC will remain in government outside the Western Cape is based on political common sense.

Talk of the ANC dropping below 50% often ignores the reality that, just about everywhere, the opposition is far behind it. The nearest an opposition party comes to challenging it outside the Western Cape is in Gauteng where the DA won 37% in 2016. Elsewhere, the nearest opposition party trails by 30 percentage points or more. The only way the ANC could be removed from government is by another deal between the DA and EFF.

But EFF leader Julius Malema has said that it will not make a deal with the DA and is more likely to look to a coalition with the ANC. What politicians say about coalitions cannot always be taken seriously and later Malema said the EFF would consider a coalition with the DA or ANC if they agreed to improve conditions in the townships where black poor people live.

But a DA-EFF coalition seems impossible, whatever Malema says now. For one thing their positions on land, a core EFF concern, are diametrically opposed. This does not matter in local government, which does not decide on land policy. It would matter hugely in national government and to a degree in the provinces.

If there is no DA-EFF deal, the only way the ANC can lose its hold on government anywhere is if either party wins a majority or at least enough to allow them to govern with small parties. But in Gauteng, no poll puts the DA above 38% – its numbers elsewhere are much weaker. In North West province, the ANC’s weakest outside Gauteng and Western Cape, the EFF is the second biggest party and it won only 16% in 2016. No poll has the EFF vote improving by more than eight percentage points.

Nationally and outside the Western Cape, then, two results are possible: the ANC wins a majority or is by far the biggest party and the only one able to form a coalition.

The reality which predictions of a change in government ignore -– the absence of another party which could defeat the ANC – means that, even if the ANC does as badly as one poll says it will, it will still be the party of government just about everywhere.

But, while the election will not change the government, it may change the balance between the two factions which compete for power within the ANC. -– One supports President Cyril Ramaphosa; the other backed former president Jacob Zuma.

The Zuma faction is still strongly represented in ANC decision-making forums. The battle between the two factions continues and the difference between them is often greater than that between the ANC and parts of the opposition. It is impossible to make sense of anything the ANC does without knowing which faction was behind it.

Ramaphosa was elected in 2017 because key ANC figures, most notably current deputy president David Mabuza, believed the ANC could not win this election if it was led by the Zuma faction. Ramaphosa’s credibility with some ANC power brokers depends, therefore, on showing that he can stem the ANC’s decline at the polls.

If the ANC improves on its 2016 vote, Ramaphosa will have presided over the first increase in its vote for 15 years. This will greatly improve his chances of winning re-election as ANC president at its next conference in 2022 because it will signal to ANC politicians that he can deliver more seats.

Because many South Africans are excluded from the benefits of the market, seats in municipal councils and legislatures are often the only ticket into the middle-class. So, an ANC gain in this election is certain to strengthen Ramaphosa now and in 2022 by showing that his leadership offers more opportunities to ANC politicians.

Even if it matches the last result or comes close, ANC power brokers could decide that Ramaphosa saved them from the opposition benches.

If the ANC drops to near 50%, whether Ramaphosa would be at risk of losing in 2022 would depend on whether ANC delegates could be persuaded to blame Zuma and his supporters. That is hardly assured. What is clear is that, the worse the ANC does, the better the Zuma group’s chances are of removing Ramaphosa at the national conference in 2022.

The two factions have very different approaches to governing and so the battle between them affects the country’s future. It is this battle, not that between the parties, which will be shaped by the election result.

This article was updated to reflect the correct date for when the ANC could remove Ramaphosa, if they chose to do so.

This article is republished from The Conversation under a Creative Commons license. Read the original article.