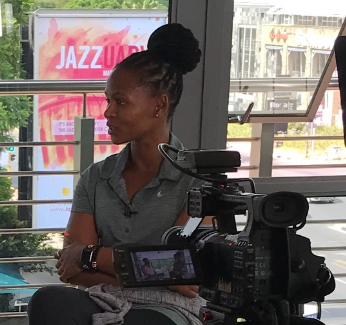 Unlike other African countries, South Africa exports fewer players to professional leagues around the world. While Ghana, Cameroon and Nigeria boast several overseas based players that include the likes of Gabrielle Onguweni and Assisat Oshoala, not one South African woman is playing professional football in Europe or Asia. This is all the more surprising because Banyana Banyana are third on the continent, and have now qualified for two consecutive Olympic Games.

Former Banyana Banyana captain, Amanda Dlamini suggests that the way South African girls are raised influences the lack of professional South African female footballers abroad. Dlamini says South African girls are conditioned to become homemakers and to further their studies first before they can dream of making a living from football, an outlook which according to Dlamini is different in West Africa.. “If we look at it holistically, it boils down to the cultural way of our upbringing as women, that we are not supposed to be playing football. That we are supposed to be studying  and earning a living and football is just a hobby. ” says Toki.

But Dlamini is happy about the number of players getting college scholarships to study in the US. Jermaine Seoposenwe, Amogelang Motau, Kaylin Swart, Nelly Mamabolo and Nomvula Kgoale are just some of the players who play in college soccer in the US. Linda Motlhalo is the latest player to move to the US where she has joined current Banyana captain, Janine van Vyk in the National Women’s Soccer League with Houston Dash. Former Banyana coach, Vera Pauw roped in the Under-20 captain. Dlamini believes Motlhalo’s move to play professional football in the US at such a young age is giant leap forward for women’s football in South Africa as a whole.

“I think Linda is the first (South African) player at her age to go ply her trade overseas. The last time we ever heard of a player, apart from Janine, was the time Nompumelelo (Nyandeni) was in Russia. Apart from that we are doing well in exporting some of our young players to America for scholarships but we would like them to see beyond that, to see them playing in the biggest league,” reasons Dlamini.

As Banyana prepare for the Women’s Afcon qualifiers which get underway next month, the Cyprus Cup is one of the tournaments that the national team will use as preparation. However, Dlamini is disappointed that the competition seems to be taken lightly, pointing to the lack of preparatory camps. She says this attitude towards the Cyprus Cup should change.

“It’s tough. The Europeans play a different style of football to what we are exposed to in Africa especially that we are going to be playing in the Africa Women’s Championship. It would be nice if we had our own tournament to expose ourselves to the African way of playing before qualifying for the World Cup,” she says.